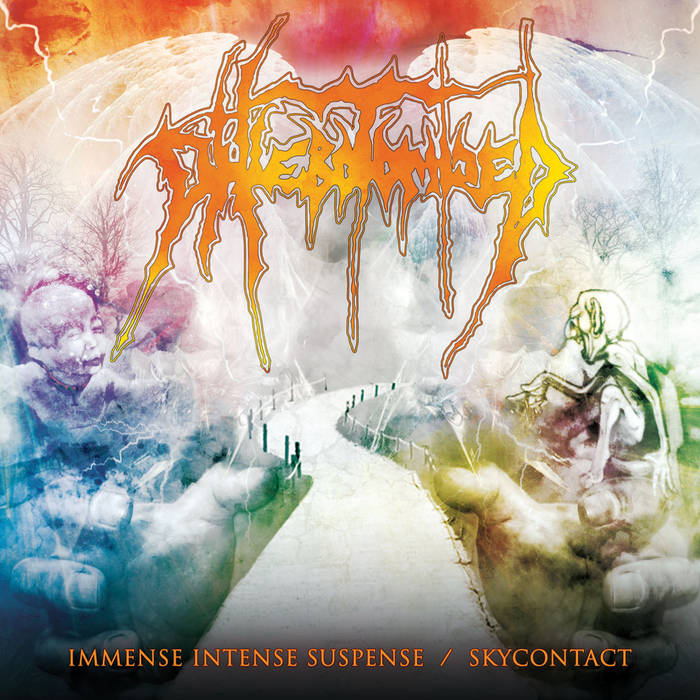 Both albums are collectable by now and in high demand!
The full length debut “Immense Intense Suspense” for this doom/avant-garde death metal act, served up both originality, and integrity. Phlebotomized started out as a pure death metal band with grind influences, releasing their early demos under that title. Somewhere along the line, the band gradually decided to change their style, as “Immense, Intense, Suspense” values melodies, and symphonic passages. This does not take away from the evil, depressing mood that swims through their music. The first thing you will notice hovering above the pounding guitar riffs, is the violin and keyboard passages that serve as the rhythm section, and gave this album a unique touch. Meloncholic, yet brutal, the songs present a story, with lyrics wrapped around the theme of religion. Acoustic guitars open songs, while the violin and keyboards are ever-present, the brutal Death grunt is mixed with great clear vocals. A gloomy atmosphere is placed, while a violin dances with violent, death metal guitar riffs. The melodic breaks throughout the album hinder the progression of the brutal parts, while the violin almost diminishes, and remains in limbo, only to pick up alongside the blasting guitar riffs. Phlebotomized gives homage to their early roots, with much of the heavier parts of the drumming focused on speed and progression. “Immense, Intense, Suspense” seems to have gotten lost somewhere in time. An album that contains so many different elements, from brutal, riff-filled structures, to meloncholic, and bittersweet melodies, is hard to imagine being so unheard of. Probably because it was an album way ahead of it’s time... This definitive new version is fully re-mastered, sounds fantastic still and will fans of true gems in Death Metal go berserk!

The follow up album “Skycontact” is the second album in the package! “Skycontact” is Phlebotomized’s sophomore effort which retains little to nothing from their first album. Brutality has drastically decreased (if we consider “Immense, intense, suspense” as being brutal) although heavy, dense and muddy guitar riffs are still present as growled vocals do. But this time emphasis is put on melodies and mood, as the ever present keyboard or the presence of clean vocals indicate. The album’s genre is quite difficult to define because of its heterogeneous composition. You could easily find passages that could be described as: “ambient”, poppy, death metal, fusion, grunge, rock, doom... although not every song features all these influences. Thrashy death metal and “ambient” are what you’ll come across more often than not. Production-wise this is really good, and it is fully re-mastered now! This album is clearly for the open-minded who enjoy their metal best with an “eclectic-sauce”.

Bandcamp Daily  your guide to the world of Bandcamp